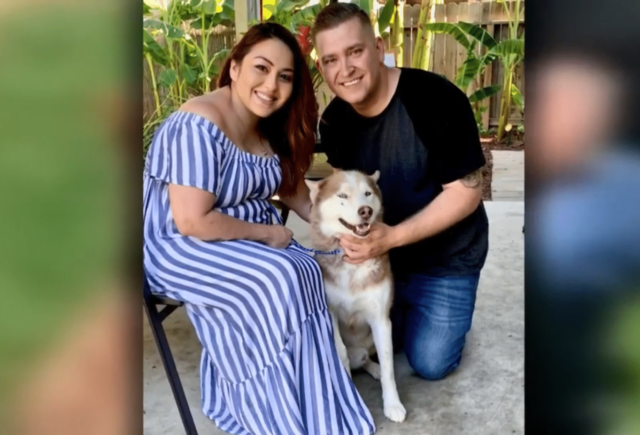 The search for a Siberian Husky named Champ was not a lost cause, even after 7 years. Manuel Veijar, his human companion, couldn’t believe his ears when he first heard the news. After all, 7 years would be enough for many people to give up on the search for their lost pets – but not for Manuel.

While Manuel worked as a serviceman for the US Navy in 2011, he bought Champ because he knew Huskies were intelligent dogs. He found out that he had a natural connection with Huskies when he interacted with the Husky of his friend back then.

Manuel couldn’t take care of Champ because he worked in the Arabic Gulf aboard the USS George H.W. Bush. Because of this, Manuel’s family had to step up to the task of taking care of Champ until Manuel retired from the Navy in 2013.

One November night, however, Manuel got a call from his mom that would devastate him. His mom told him that Champ ran away and was nowhere to be found. While this wasn’t the first time Champ did this, Manuel knew this time would be different.

Manuel tried searching in the nearby high school’s tracks and the cemetery because these were the places where Champ would usually run off to. Champ’s microchip was also registered as lost so it’d be easier to pinpoint his location. Manuel would also occasionally receive tips on Champ’s whereabouts. However, it would be to no avail. Days turned into months and years, and Champ would still be missing.

7 years later, Manuel got a knock on his door that would instantly melt his heart. It was an animal control officer who told him that Champ was found alive!

According to the farmer that found him, Champ had been running around his ranch for the past month. With years of separation from the loving home he had, Champ wasn’t so friendly when the farmer interacted with him. However, he still reached out and noticed his wounded leg. Because of this, he took Champ to the vet, where he found out he had a real owner. Up until this moment, Champ was a lost dog but is now found.

Within hours, Champ and Manuel were together again for good. With one call from Manuel, Champ instantly wagged his tail and recognized his human companion he had been longing for all these years.

Champ’s story is a story that reminds us that we should not lose hope even if it looks impossible. Discover more about Champ’s story with the video below.