Home About Doggy Stories Shelter Dog That Nobody Picked Makes His Own Bed To Show People... 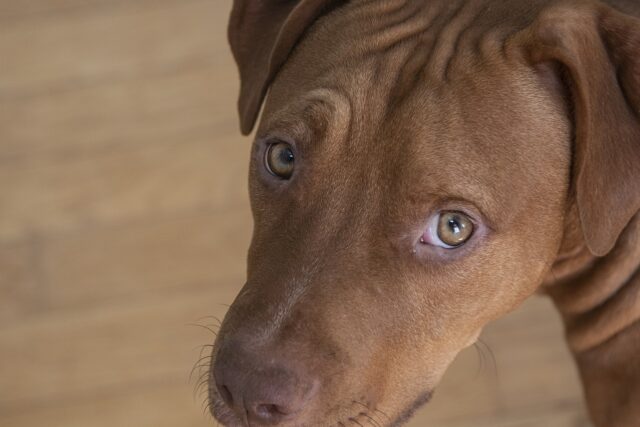 Life in a dog shelter is never easy. Most dogs who are placed in these shelters have never experienced the love of a family before. Aside from the shelter workers who take care of them, they spend most of their shelter lives alone in their kennel.

Such is the heartbreaking case of a homeless Pitbull named Rush. Rush never knew the joys of staying with a loving family. Thankfully, his loneliness was about to end when the SICSA Pet Adoption Center took him in.

Rush is a loving and affectionate dog. When SICSA took him in, he only thought of being adopted by his new forever family. But he soon realizes that it was not going to be that easy.

Hundreds of families came in and out of the rescue shelter. Each time they came out, they always picked another dog other than Rush. No matter how much he tries to be at his best behavior, nobody would notice him.

Being a Pitbull, Rush was always at the bottom of every family’s choice. Pitbulls are given a bad rep as aggressive and dangerous dogs. The stereotype that Pitbulls are dangerous keeps people from seeing them for who they really are—loving and gentle dogs.

But Rush was not going to give up that easily. Taking matters into his own paws, Rush devised a plan to make people see his real personality, that he has always been a good boy.

When a shelter worker walked past Rush’s enclosure one day, he noticed something peculiar about the dog. He grabbed his blanket with his mouth and walked around his bed as if making it. This was the moment the shelter realized that Rush wanted everyone to know how good he was.

The shelter captured Rush making his bed in a heartwarming video and posted it on their Facebook page. The video quickly became viral, receiving more than a million views. The dog that nobody wanted to pick suddenly became an internet star!

After the video went viral, adoption requests poured in, and it wasn’t long before Rush was finally adopted by a loving family. The family lost their dog earlier, and when they saw Rush’s video, they knew he was the one.

The wife immediately texted his husband that she wants Rush, and her husband was ready for another dog, too. So the couple rushed to the SICSA Pet Adoption Center, where they formally adopted Rush as part of their loving family. Now Rush can finally experience the joys of having his own family.

Watch Rush make his bed in the short clip below.