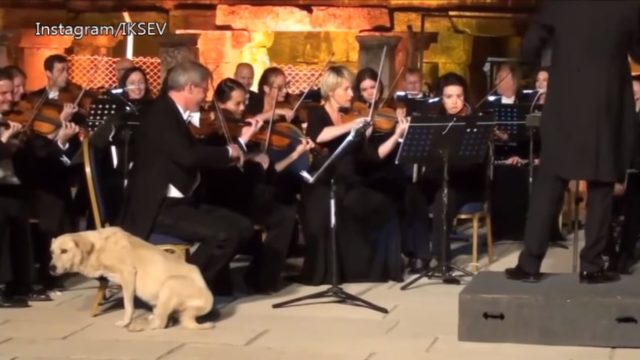 Believe it or not, dogs actually have a musical sense and taste. Many studies and researches proved that canines possess a kind of skill when it comes to music, although they can’t sing actual lyrics from a certain song as humans do, they mostly howl the tune and melody, and that’s their own way of singing.

Some dogs don’t usually sing the song but just listen instead. These are the ones who just enjoy the solitude of listening to good music. That is more than enough for them.

This wonderful friendly dog in this video is one epitome of how dogs don’t only have sharper hearing senses but can also interpret and just appreciate music through simple listening. He happens to pass by and wander on stage inside the ruins of the ancient city of Ephesus, Greece wherein a classical or orchestral show is performing.

The crowd started to laugh a little when they noticed the dog on stage walking really slowly as if he’s soaking to the music. The orchestra wasn’t bothered at all they just continued playing but they were aware of the stray dog.

He eventually decided to sit down beside the first chair violin and just listened to the whole performance until the end. It was an if he too was a spectator in the show, silently sitting there and enjoying as well as appreciating the beautiful music.

The crowd applauded when the dog settled down until the end of the performance. The Vienna Chamber Orchestra was the one performing on stage and the stray dog went up the moment they’re playing the Italian Symphony No. 4 that was composed by Felix Mendelssohn.

He was easily swayed by the piece and it was a perfect sight. The spectators were all tickled by the presence of the dog on the show but either way, the stray didn’t make any move that will ruin the performance and none of the musicians were bothered by his coming.

Thanks to Rover for the original article