Home About Doggy The Internet Is Going Crazy Over A Boston Terrier’s Futile Attempts To...

A tennis ball is unquestionably one of the most popular toys among dogs. Thousands of videos and images of dogs playing with their favorite balls have already been uploaded to the internet. And they’re all guaranteed to put a grin on everyone’s face.

One of these dogs is this Boston terrier from Saskatoon, Saskatchewan, Canada. Manson not only enjoys tennis balls, but he totally adores them. Nothing makes him happier than the simple game of playing fetch with his mother, Kimberly Brown, every day.

Even in severe weather, the dog would brave the elements for a few more rounds of fetch. However, among Manson’s many balls in the house, he is especially loyal to one tennis ball in particular. The ten-year-old dog has built an emotional attachment to the ball and does not appear to want to give it up anytime soon.

Kimberly even replaced her dog’s old ball with five new ones. Manson, on the other hand, was adamant about sticking with his favorite toy. The dog’s favorite tennis ball was the one he always brought with him.

Manson’s fetch routine was recently disrupted by the first snowfall of the winter season. This generally doesn’t affect the dog, but it bothered him this time.

Manson would simply leave the ball out in the backyard whenever the two played fetch. And that’s exactly what he did the day before the snowstorm, leaving his ball frozen on the ground.

Manson was furious with the situation and couldn’t figure out what was going on. Kimberly, on the other hand, found her dog’s response to the frozen toy amusing.

As a result, she captured the entire scene, which mostly revolves around Manson’s unsuccessful attempts to free his stuck tennis ball. His efforts, however, were in vain. Thankfully, his mother was around to assist him.

After Kimberly got the ball unstuck, the two continued playing fetch as usual.

Manson brought his ball inside this time after the game was finished. Hopefully, he won’t actually make the same mistake again next winter.

Here’s a cute pic where you may see his adorable but fruitless tries. 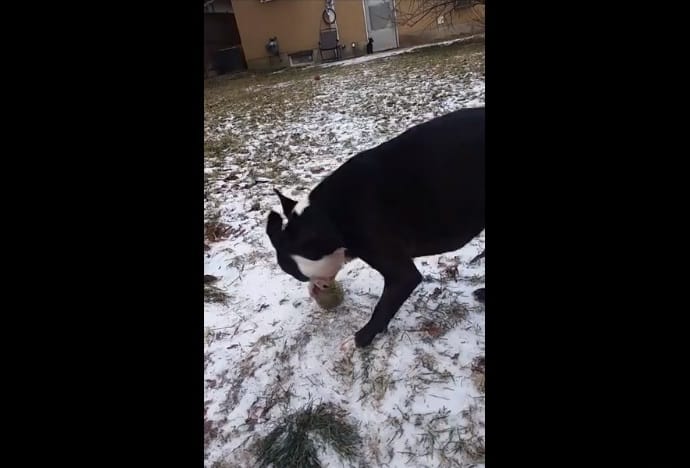