Home About Doggy Stories This Woman Didn’t Hesitate To Jump In A Frozen Swimming Pool To... 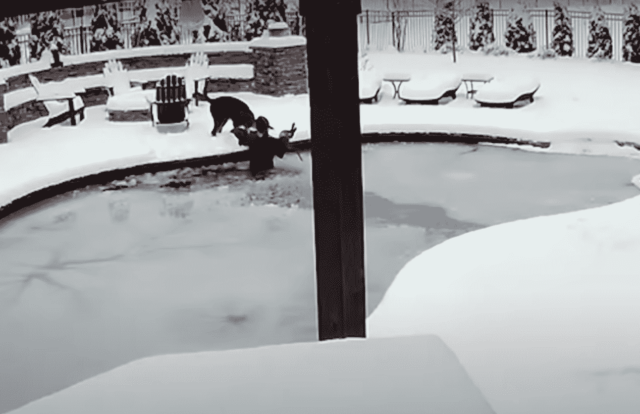 When a swimming pool freezes during the winter, it’s best to keep our dogs away from it to avoid any untoward incidents. Jennie Tatum, a woman from Tennessee, will certainly keep this in mind for next year’s winter season after having to jump in a frozen swimming pool just to rescue her dog named Sid who accidentally fell in it.

Video surveillance footage captured the moment Sid accidentally fell in the frozen swimming pool while he was playing with his doggo sibling. When Jennie realized what had just happened, she immediately ran to where the dogs were and didn’t hesitate to jump after the dog.

Although it was incredibly cold, Jennie didn’t seem to mind this at all because she was focused on getting Sid out of the pool. Clearly, she was filled with adrenaline due to the rush of the moment and the intricacy of the situation. In the video, she could be seen desperately pushing through the ice as she tried to search for her pup who was probably already freezing.

After seconds of moving around the frozen pool, Jennie realized time wasn’t in her favor and decided to hop back out of the pool to get a better view of where the dog was. Upon getting out of the pool, Jennie was able to find out where Sid was stuck and quickly jumped back in to get him out.

Thankfully, Jennie was able to pull the dog out of the water. Even though Sid was barely conscious the moment he got out of the cold water, he was able to recover shortly after.

Had the dog been in the frozen pool for a few more minutes, he would have likely succumbed to hypothermia. We’re delighted to know that Sid has fully recovered from this incident and will probably avoid frozen swimming pools the next winter.

Discover more about Jennie’s heroic actions with this video.